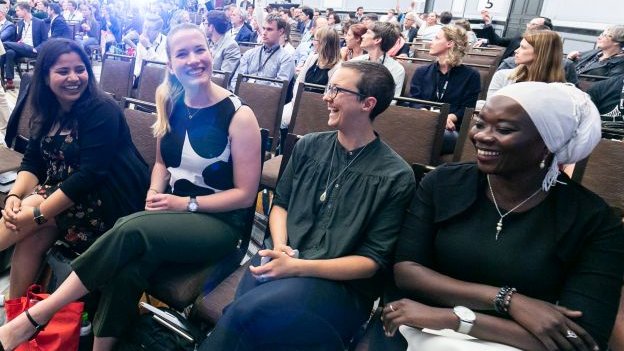 #GoGAIN19: From August 23 to 25, 2019 the annual meeting and talent fair of the German Academic International Network (GAIN) was the largest annual meeting for German scientists outside of Europe. In the afternoon of August 24, the conference language switched from German to English to also include a diverse English Program tailored to international researchers.

The meeting, organized by the German Academic Exchange Service (DAAD), the Alexander von Humboldt Foundation (AvH,) and the German Research Foundation (DFG) in cooperation with other science organizations, was dedicated to the careers of young researchers and questions of science policy. The DAAD was represented by its chair Professor Wintermantel and the designated President Professor Mukherjee, the DFG by Vice President Professor Griem and the Humboldt Foundation by Secretary General Dr. Aufderheide. The Federal Government was represented by Thomas Rachel, Parliamentary State Secretary in the Federal Ministry of Education and Research; The German Bundestag was represented across parties by members of its Committee on Education, Research and Technology Assessment.

GAIN19 at the Westin St. Francis in San Francisco informed and enabled discussions among over 600 people, including approx. 250 young German researchers, 100 international scientists as well as over 230 German representatives from universities, research institutions and funding organizations.

At the GAIN Science Slam, which was offered for the first time, seven young scientists practiced science communication and brought their research to the audience in an entertaining way. The Young Innovators Showcase, a format that was first introduced in 2018, gave alumni of GAIN and DAAD a platform to showcase their science-based startup companies. The workshops offered skill-training, discipline-based consultations, and information on non-university research. For the first time at a GAIN19 fish bowl-discussion researchers and politicians met at eye level. The career dating formats “Wirtschafts-Café”, “Meet-a-Politican” and “Meet-an-Expert” were very well received. The Talent Fair and the Lunch Sessions were booked up within a very short time. The young researchers also praised the postdoc speed dating formats “Improv for Life”, “Post-it Science” and “Introduction to Designing your Life “, as well as the GAIN-Stammtisch “Cheers to Careers!” on Saturday evening.

The English Program on Saturday afternoon, August 24, was open to all international early career researchers who were interested in bringing their research career to Germany. The Research-in-Germany workshop provided information on opportunities for postdocs and junior faculty in Germany. Over 60 universities, funding agencies and research institutions invited the international scholars to their stands at the talent fair. The German institutions presented their job openings and exchanged important information. Valuable networks were formed and expanded.

Every year international researchers are invited to join the annual GAIN conference on Saturday afternoon. The program is entirely conducted in English and provides information on academic careers and research opportunities in Germany. It is a free and unique opportunity for young academics to directly interact and meet with the VIPs of the German research landscape. Find the English Program here:

Welcome on stage: the GAIN Science Slam premiered at the annual GAIN conference in San Francisco 2019. Seven researchers of various disciplines presented their science slam pitch, touching on topics such as water cycles, gravitational waves, fecal molecules and many more, all with the objective of imparting current research results to a diverse audience in an understandable and entertaining way. The documentary below portrays the slammers and explains this new creative style of science communication:

The Talent Fair at the GAIN annual conference is the largest fair for scientific careers in Germany outside of Europe. Numerous universities, companies, funding and research institutions present their institutions and job openings at over 60 stands. The scientists have the opportunity to meet their future employers in person, ask for advice, make valuable contacts and expand their transatlantic network.

The inaugural GAIN Young Innovators Showcase at the annual conference in San Francisco 2019 featured the ideas of young startup founders who made the leap from bench to business. In a presentation, they introduced their research-based innovation and talked about the career paths that led them to become entrepreneurs. The GAIN movie „From bench to business“ calls attention to these young innovators and was designed to inspire the next generation of thought leaders from all parts of the scientific spectrum to follow their inspiration and adopt the entrepreneurial mindset in their own career paths.

Film clip: “From Bench to Business”

This was #GoGAIN19: The annual conference and talent fair GAIN19 took place in San Francisco last August 2019. See below the picures of Barak Shrama.